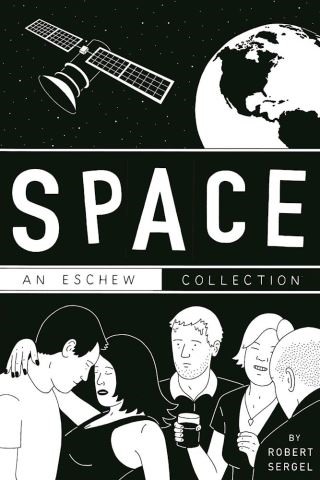 "The influence of films, newspapers, music, and social scenes take a strong position in Sergel's work giving a sense of life lived and the detached moments that stay with us as a kind of narrative memory of ourselves."—The Beat

SPACE collects Robert Sergel's Eschew, a Best American Comics selection, and an Ignatz Award nominee for Outstanding Comic. Eschew takes an unflinching look at those little moments on the way to adulthood that happen when no one's looking, that you laugh out loud to remember, that you'd think twice before sharing, and that are the building blocks of wisdom.

Robert Sergel:
Robert Sergel was born in Boston, MA in 1982. He has a degree in Photo & Imaging from NYU's Tisch School of the Arts. In the mid-2000's he was a member of the web comic collective TRANSPLANT. He now draws the Ignatz-nominated comic series ESCHEW, a portion of which was featured in the 2011 Best American Comics anthology. He currently lives in Cambridge, MA.