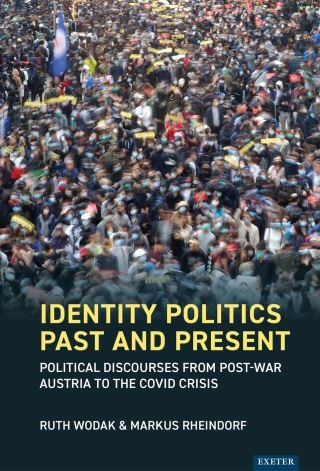 Identity Politics Past and Present

Political Discourses from Post-War Austria to the Covid Crisis

This book traces the re-emergence of nationalism in the media, popular culture and politics, and the normalization of far-right nativist ideologies and attitudes in Austria between 1995 and 2015, within the framework of Critical Discourse Studies. In doing so, it brings together a range of theoretical and empirical approaches to identity politics, contemporary popular culture, far-right populism and commemoration.

While contradictory yet intertwined tendencies towards renationalization and transnationalization have often framed debates about European identities, the so-called refugee crisis of 2015 intensified and polarized these debates. The COVID-19 pandemic, as another major crisis, saw nation-states react by closing borders, while symbols of banal nationalism proliferated.

The data under discussion here, drawn from a variety of empirical studies, suggest that changes in memory politics—the way past events are collectively remembered and tied into current political discourses—are also linked to the dynamics of migration; the influence of financial and climate crises; changing gender politics; and a new transnational European politics of the past. Accordingly, the authors assess current challenges to liberal democracies, as well as fundamental human and constitutional rights, in relation to new trends of renationalization across Europe and beyond.

Ruth Wodak is an internationally renowned and widely published expert in sociolinguistics and discourse studies. She is Emerita Distinguished Professor of Discourse Studies at Lancaster University, UK, and affiliated to the University of Vienna. She is a member of both the Academia Europaea and the British Academy of Social Sciences; and was awarded the Grand Decoration of Honour in Silver for Services to the Republic of Austria in 2011, and the Kerstin Hesslgren Chair of the Swedish Parliament at University of Örebro in 2008. She was awarded honorary doctorates by the University of Örebro in 2010 and by Warwick University in 2020. She is co-editor of the journals Discourse and Society, Critical Discourse Studies, and Language and Politics. Her most recent monograph is The Politics of Fear: The Shameless Normalization of Far-Right Discourse (2021).

Markus Rheindorf teaches applied linguistics at the University of Vienna and Central European University, and specializes in critical discourse studies and academic writing. He has received fellowships from the International Centre for Cultural Studies and the Institute for Human Sciences, Vienna. His recent publications include Revisiting the Toolbox of Discourse Studies: New Trajectories in Methodology, Open Data and Visualization (2019).