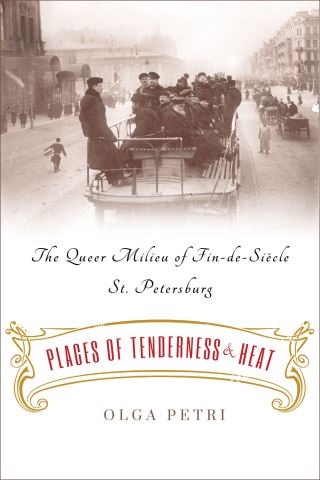 Places of Tenderness and Heat

Places of Tenderness and Heat is a ground-level exploration of queer St. Petersburg at the fin-de-siècle. Olga Petri takes us through busy shopping arcades, bathhouses, and public urinals to show how queer men routinely met and socialized. She reconstructs the milieu that enabled them to navigate a city full of risk and opportunity.

Focusing on a non-Western, unexplored, and fragile form of urban modernity, Petri reconstructs a broad picture of queer sociability. In addition to drawing on explicitly recorded incidents that led to prosecution or medical treatment, she investigates the many encounters that escaped bureaucratic surveillance and suppression. Her work reveals how queer men's lives were conditioned by developing urban infrastructure, weather, light and lighting, and the informal constraints on enforcing law and moral order in the city's public spaces.

Places of Tenderness and Heat is an ambitious record of the dynamic negotiation of illicit male homosexual sex, friendship, and cruising and uncovers a historically fascinating urban milieu in which efforts to manage the moral landscape often unintentionally facilitated queer encounters.

Olga Petri is a Leverhulme/Newton Trust Early Career Research Fellow in the Department of Geography at the University of Cambridge. Follow her on Twitter @olga_petri