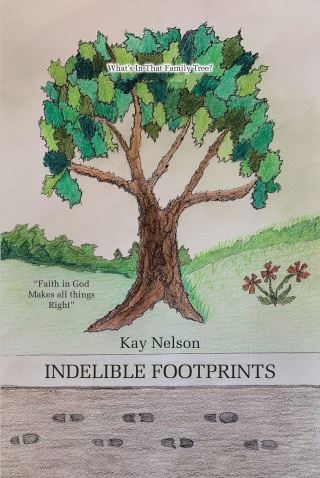 I have been the recipient of a treasure chest of family heirlooms. There are old pictures, poems, genealogies, and stories. Because past generations were so faithful to preserve their family history, I felt compelled to preserve their “footprints.” My favorite heirloom is a metal crest that dates back to the 1200s. The stamp reveals a bird with writing in the Welsh language which, when translated, reads, “Faith in God makes all things right.” I have several unique things that the book contains, such as a contract with the Indians for land and a Civil War diary written by my great-grandfather. There are newspapers dated March of 1863 offering a bounty of $20,000 for the head of Lincoln. Poems were written by my grandmother depicting the emotional trauma she went through during World War II that came from my treasure chest. The stories of my uncles who were in that war one in the South Pacific and the other in Germany. There are stories of the French Huguenots, pioneers, Pilgrims, and Scotch Reformers that were imprisoned for their faith as well as stories of the devastation of the bubonic plague, both in England and in Germany. It also includes a piolet that transported the Apollo 13 astronauts. My linage contains, missionaries, preachers, and a preacher’s wife. Because former generations were faithful to preserve their history, I felt compelled to include their stories in the book, making their footprints indelible.