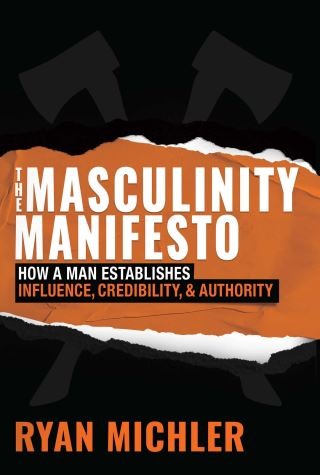 How a Man Establishes Influence, Credibility and Authority

Men are not the enemy, and masculinity, contrary to what much of popular culture would have you believe, is the solution to what plagues individuals, families, and society as a whole.

Men have a moral obligation to lead themselves and others well. Unfortunately, much of society has bought into and perpetuated the misguided idea that men have become the enemy of all that is right and good in a virtuous and thriving society. In short, even the concept of a Patriarch (which is simply the male leader of a home, organization, or community) has become taboo, and masculinity itself has been written off as a toxic and destructive force.

In The Masculinity Manifesto, author and podcaster Ryan Michler focuses on how a man can wield his power and lead others well with influence, credibility, and authority. Ryan refuses to accept the gradual and intentional decay of masculinity, instead he chooses to tackle the questions others are afraid to address. The Masculinity Manifesto empowers men to find true purpose and fulfillment by taking responsibility for their lives and serving others.

A man who exercises his responsibility to lead himself and others well is not to be feared, undermined, or rejected but embraced, respected, and honored. Men, after all, aren’t the enemy, and masculinity, contrary to what much of what popular culture would have you believe, is the solution to what plagues individuals, families, and society as a whole.

Ryan Michler: Ryan Michler is a husband, father, Iraq Combat Veteran, and the founder of Order of Man. Ryan was raised without a permanent father figure and has seen first-hand how a lack of strong, ambitious, self-sufficient men has negatively impacted society. He believes many of the world’s most complicated and challenging problems could be resolved if men dedicated themselves to becoming more capable husbands, fathers, businessmen, and community leaders. It has now become his life’s mission to help men across the planet step more fully into their roles as protectors, providers, and presiders over themselves, their families, their businesses, and their communities. His podcast, Order of Man, has been downloaded over 25,000,000 times. He has a social media presence of over 600,000 followers. Thousands of men have successfully completed his online and live workshops, courses, and events.