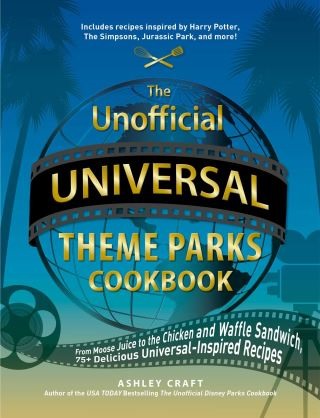 Bring the delicious food of the Universal Theme Parks right to your own home with these 75+ beloved recipes you can enjoy between trips.

Perfect for everyone from park hopping experts who miss those familiar flavors in between trips to fans who have yet to visit the parks, The Unofficial Universal Theme Parks Cookbook has all the recipes you’ll need to make treats worthy of Homer Simpson, Harry Potter, and more!

Ashley Craft: As a child who grew up in Anaheim, California, Ashley Craft could recite the Star Tours ride by heart, navigate the Park without a map, and fell asleep to the sound of Disneyland fireworks each night in her bedroom. After two internships at Walt Disney World and many, many more visits to the Disney Parks, Ashley is now one of the leading experts of Disneyland and Walt Disney World. Her popular blog, Ashley Crafted, is best known for featuring recipes inspired by Disney Park foods to help people recreate that Disney magic right in their own kitchens. Today, Ashley lives with her husband, Danny, and three kids, Elliot, Hazel, and Clifford (and kittens Figaro and Strider)…but she still makes time to visit the Mouse. Follow her on Instagram @TheUnofficialTasteTester.