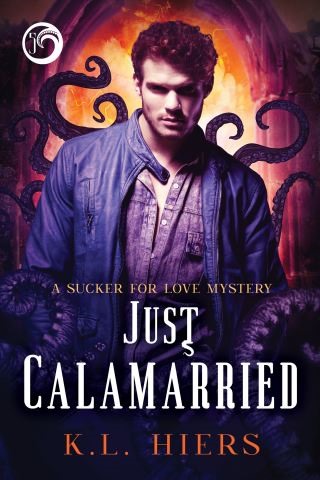 Newlyweds Sloane and Loch are eagerly expecting their first child, though for Sloane that excitement is tempered by pregnancy side effects. Carrying a god’s baby would be enough to deal with, especially with the whole accelerated gestation thing, but it’s not like Sloane can take maternity leave. He works for himself as a private investigator. Which leads him to his next case.

At least this strange new mystery distracts him from the stress of constant puking.

When two priests are murdered within hours of each other, a woman named Daphne hires Sloane and Loch to track down the prime suspect—her brother—before the police do. Between untangling a conspiracy of lies and greed, going toe-to-toe with a gangster, and stealing a cat, they hardly have time to decorate a nursery….

K.L. “Kat” Hiers is an embalmer, restorative artist, and queer writer. Licensed in both funeral directing and funeral service, she worked in the death industry for nearly a decade. Her first love was always telling stories, and she has been writing for over twenty years, penning her very first book at just eight years old. Publishers generally do not accept manuscripts in Hello Kitty notebooks, however, but she never gave up.

Following the success of her first novel, Cold Hard Cash, she now enjoys writing professionally, focusing on spinning tales of sultry passion, exotic worlds, and emotional journeys. She loves attending horror movie conventions and indulging in cosplay of her favorite characters. She lives in Zebulon, NC, with her husband and their children, some of whom have paws and a few who only pretend to because they think it’s cute.