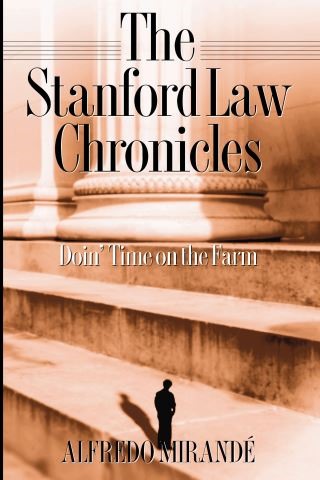 Doin' Time On The Farm

In the midst of a long and distinguished academic career, Alfredo Mirandé left his position as professor of sociology and chair of ethnic studies at the University of California, Riverside, to attend law school at Stanford University. This book is an extraordinary chronicle of the events in his life that led him to make this dramatic change and of the many obstacles he encountered at law school. The Stanford Law Chronicles is a comprehensive, first-person account of the law school experience, written by a person of color. Mirandé delivers a powerful and moving critique of the rigid hierarchies he encountered and of systematic attempts to strip him of his identity and culture. He also reflects on the implications of an increasing number of women and minority law school students for law and legal education.

Although Stanford is considered to be one of the most progressive law schools in the country, Mirandé's experience there was one of alienation and frustration, as he encountered elitism and rigid hierarchies. Covering all three years at Stanford, he describes his experiences and the problems he encountered in the classroom. He also discusses Law Review, which he found to be pretentious, the Immigration Clinic where he successfully represented his first client, and the alternative Lawyering for Social Change curriculum that became a haven in an otherwise hostile environment. Interspersed with his account of law school are autobiographical snapshots and experiences, including that of the death of his brother, Héctor, which was the catalyst for his decision to pursue his childhood dream of attending law school and becoming a lawyer.

This controversial book is certain to spark lively debate.

Alfredo Mirandé is professor of sociology and chair of ethnic studies at the University of California, Riverside. He integrates his teaching and research with a limited, largely pro bono law practice, specializing in criminal law and employment discrimination. He is the author of The Chicano Experience (1994), Gringo Justice (1994), and Jalos, USA (2014), all published by the University of Notre Dame Press.