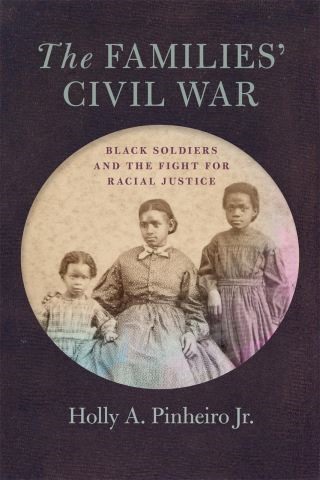 Black Soldiers and the Fight for Racial Justice

This book tells the stories of freeborn northern African Americans in Philadelphia struggling to maintain families while fighting against racial discrimination. Taking a long view, from 1850 to the 1920s, Holly A. Pinheiro Jr. shows how Civil War military service worsened already difficult circumstances due to its negative effects on family finances, living situations, minds, and bodies. At least seventy-nine thousand African Americans served in northern USCT regiments. Many, including most of the USCT veterans examined here, remained in the North and constituted a sizable population of racial minorities living outside the former Confederacy.

In The Families’ Civil War, Holly A. Pinheiro Jr. provides a compelling account of the lives of USCT soldiers and their entire families but also argues that the Civil War was but one engagement in a longer war for racial justice. By 1863 the Civil War provided African American Philadelphians with the ability to expand the theater of war beyond their metropolitan and racially oppressive city into the South to defeat Confederates and end slavery as armed combatants. But the war at home waged by white northerners never ended.

Civil War soldiers are sometimes described together as men who experienced roughly the same thing during the war. However, this book acknowledges how race and class differentiated men’s experiences too. Pinheiro examines the intersections of gender, race, class, and region to fully illuminate the experiences of northern USCT soldiers and their families.

Holly A. Pinheiro Jr.: HOLLY A. PINHEIRO JR. is an assistant professor of African American history at Furman University. He is the author of articles in American Nineteenth Century History, the African American Intellectual History Society’s Black Perspectives blog, and the Journal of the Civil War Era's Muster blog.