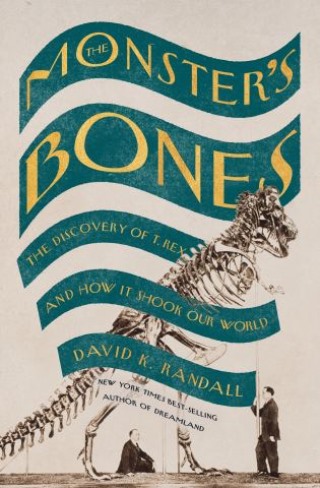 The Monster's Bones: The Discovery of T. Rex and How It Shook Our World

A Science Friday Best Book to Read This Summer

A gripping narrative of a fearless paleontologist, the founding of America’s most loved museums, and the race to find the largest dinosaurs on record.

When Brown unearths the first Tyrannosaurus Rex fossils in the Montana wilderness, forever changing the world of paleontology, Osborn sees a path to save his museum from irrelevancy. With four-foot-long jaws capable of crushing the bones of its prey and hips that powered the animal to run at speeds of 25 miles per hour, the T. Rex suggests a prehistoric ecosystem more complex than anyone imagined. As the public turns out in droves to cower before this bone-chilling giant of the past and wonder at the mysteries of its disappearance, Brown and Osborn together turn dinosaurs from a biological oddity into a beloved part of culture.

Vivid and engaging, The Monster’s Bones journeys from prehistory to present day, from remote Patagonia to the unforgiving badlands of the American West to the penthouses of Manhattan. With a wide-ranging cast of robber barons, eugenicists, and opportunistic cowboys, New York Times best-selling author David K. Randall reveals how a monster of a bygone era ignited a new understanding of our planet and our place within it.

David K. Randall: David K. Randall is the New York Times best-selling author of Dreamland, The King and Queen of Malibu, Black Death at the Golden Gate, and The Monster's Bones. His writing has appeared in the New York Times, Wall Street Journal, and Los Angeles Times, among other publications. A senior reporter at Reuters, he lives in Montclair, New Jersey.