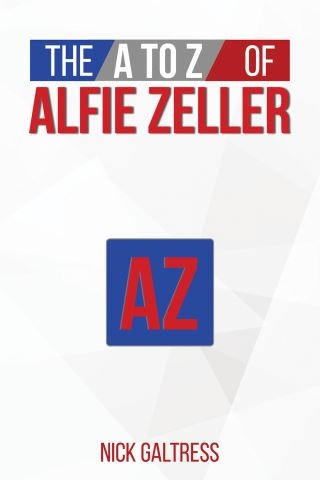 The A to Z of Alfie Zeller

Dip into The A to Z of Alfie Zeller to find: Petty Officer Sam Zeller, who swam the Channel long before Captain Webb, in a straight line, without body grease in search of escargots; Pierre, who invented Chicken Marengo and was promoted to corporal by Napoleon; Alicia Zeller, who ran the séances at which Arthur Conan Doyle saw fairies. Meet Trooper Zeller, who survived the Charge of the Light Brigade, or would have done, if he’d been there; Zeb Zeller, whose diaries made those of Sam Pepys read like the tedious account of bowel movements which they mostly are; Herman Zeller, who put Franz Kafka on to surrealism; the Zeller who was defenestrated in Prague and fell into a rose bush; and finally meet the Zeller who, although a staunch Royalist, fought in the Parliamentary ranks at Naseby.
It is all explained somewhere and Alfie does not spare the details. If short of a few, he admits to perhaps having made them up. What, he argues, is a slightly dubious fact, if it gets in the way of the truth?

Nick Galtress: The author, determinedly Yorkshire by birth and inclination is now at the back-end of his life. The front-end was largely spent in marrying, siring children, watching them eat away his slender resources, following a very devious career path, (more of a careering path really) and earning a good deal of his living with his pen. After years of writing what others wanted him to write for money, he now writes for himself and, probably, little or no money. If he has found ‘a voice’, it is a very satirical one. The list of people, things and philosophies that he dislikes is long and growing. He hopes to get around to ‘having a go’ at all of them. This is salvo number two. The opening salvo was the irreverent comedy, Death’s Door. Second on the Left Down the Corridor.