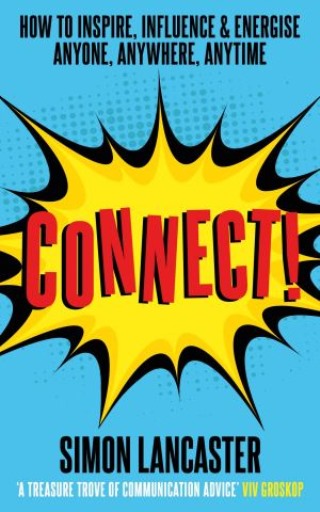 How to Inspire, Influence and Energise Anyone, Anywhere, Anytime

Why do some people radiate energy when they speak whilst others fizzle out before they've even begun? How do some writers make our hearts race whilst others make us feel like closing the book? Why are some work colleagues seemingly more influential, or funnier, than others?

Top speechwriter Simon Lancaster explains that the secret of brilliant communication is all about making connections. Whether in speech or in writing, at a networking event or in an email, at work or at home, the best communicators find ways of connecting with their audiences. More than that, they are able to connect the personal with the universal, the past with the present, the abstract with the everyday, the visual with the verbal, the moral with the mundane. Like hot-wiring a car, connections are able to bypass logic and access our deepest instincts and emotions, generating an instant neurological reaction.

Connect reveals the secret art of making connections in eleven engaging, revelatory chapters. It blends cutting-edge neuroscience with ancient rhetoric and wonderfully shareable examples from popular culture; and it incorporates exercises to help work your own creative muscles, so you can become quicker at making connections and finding your own stories, metaphors, analogies and jokes. If you want more sparkle when you speak, more power when you present, more wow when you write, then this book will show you the skills to connect with anyone about anything, anytime and anywhere.

Simon Lancaster: Simon Lancaster first started writing speeches in the late 1990s for members of Tony Blair's Cabinet. He has since gone on to write speeches for the CEOs of some of the world's biggest companies. He is an Executive Fellow of Henley Business School and lectures on Creative Writing at the University of Cambridge.

Simon regularly appears on BBC and Sky News discussing speeches and has written articles for the Guardian, Daily Mail, Spectator, Prospect and GQ. He frequently makes keynote speeches at major conferences around the world and his social media videos attract hundreds of thousands of views. His 2016 TEDx Talk 'Speak like a Leader' has had more than three million views. He lives in the Brecon Beacons with his wife, two daughters, a dog, two cats and several chickens.