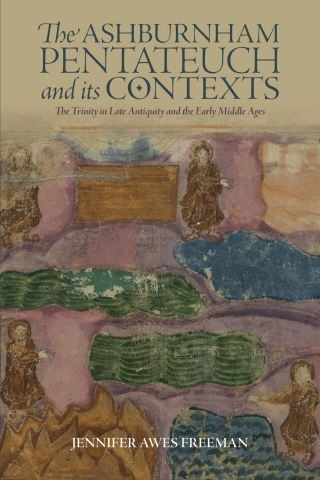 The Ashburnham Pentateuch and its Contexts

The Trinity in Late Antiquity and the Early Middle Ages

The Ashburnham Pentateuch is an early medieval manuscript of uncertain provenance, which has puzzled and intrigued scholars since the nineteenth century. Its first image, which depicts the Genesis creation narrative, is itself a site of mystery; originally, it presented the Trinity as three men in various vignettes, but in the early ninth century, by which time the manuscript had come to the monastery at Tours, most of the figures were obscured by paint, leaving behind a single creator. In this sense, the manuscript serves as a kind of hinge between the late antique and early medieval periods. Why was the Ashburnham Pentateuch's anthropomorphic image of the Trinity acceptable in the sixth century, but not in the ninth?

This study examines the theological, political, and iconographic contexts of the production and later modification of the Ashburnham Pentateuch's creation image. The discussion focuses on materiality, the oft-contested relationship between image and word, and iconoclastic acts as "embodied responses". Ultimately, this book argues that the Carolingian-era reception and modification of the creation image is consistent with contemporaneous iconography, a concern for maintaining the absolute unity of the Trinity, as well as Carolingian image theory following the Byzantine iconoclastic controversy. Tracing the changes in Trinitarian theology and theories of the image offers us a better understanding of the mutual influences between art, theology, and politics during Late Antiquity and the early Middle Ages.