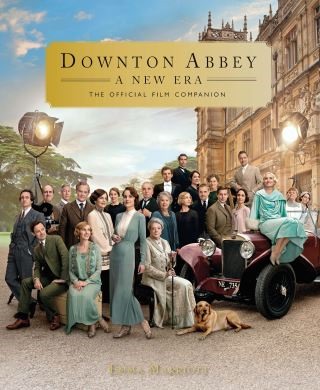 The worldwide phenomenon and multi-award winning Downton Abbey returns to the big screen with a movie sequel starring the Crawley family and their household staff—and the Downton Abbey: A New Era: The Official Film Companion is the Downton fan’s front-row ticket to all the behind-the-scenes action. In addition to the original principal cast—including Dame Maggie Smith as the Dowager Countess, Michelle Dockery as Lady Mary, and Hugh Bonneville and Elizabeth McGovern as Lord and Lady Grantham—fans will gain an unprecedented look at the new Downton characters, including those played by new cast members Hugh Dancy, Laura Haddock, Nathalie Baye, and Dominic West. Featuring spectacular photographs from the production, interviews with the cast and crew, and insight from Downton Abbey writer and creator Julian Fellowes, Downton Abbey: A New Era: The Official Film Companion gives fans an in-depth experience of the magic and elegance of Downton Abbey.

Emma Marriott: Emma Marriott is the author of more than 15 high-profile popular histories and other non-fiction books, including the official companion to the first Downton Abbey movie, The World of Vanity Fair, and The World of Poldark. A former in-house editor at Pan Macmillan in London, Emma lives in Bedfordshire, England.