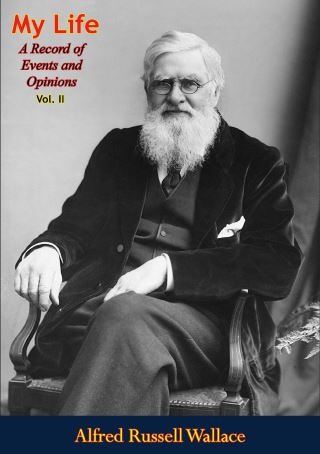 A Record of Events and Opinions vol. II

The naturalist and explorer Alfred Russell Wallace is famed for his contributions to evolutionary theory; his autobiography charts these and other accomplishments.

Wallace was born in Wales to a modest family, and originally began his career as an apprentice surveyor in a relative's business in London...However a growing interest in the collection of insects, and the good impressions he left on members of the scientific community, led him to head abroad on his first expedition as a naturalist.

His journeys to the Amazon saw him both observe the fauna and map uncharted regions of the rainforest. Later, his voyage to the Malay archipelago yielded a collection of some 126,000 insect specimens and beetles; thousands of these had never before been cataloged in science. Jotting many notes during his years abroad, Wallace determined his own notions of natural selection—on arriving back in England, he published these ideas and began a lively correspondence with Charles Darwin.

As a contemporary and friend of Darwin, Wallace had great bearing upon evolutionary thought. Although the two disagreed on how exactly natural selection took place, in broad terms they concurred; Wallace would author multiple papers defending and further explaining the ideas set out in Darwin's 'On the Origin of Species'.

In certain fields, such as identification and arrangement of new animal species, Wallace was considered the foremost expert. He was a keen and meticulous observer of the natural world, and one of the first scientists to ever express anxiety about the effects that mankind was having upon the natural environment.

This excellent autobiography offers readers substantial insight into how Wallace made his discoveries and became a respected figure. Though often struggling financially, and holding no formal qualifications, with deeds and sheer effort Wallace made his mark upon biological science.-Print ed.