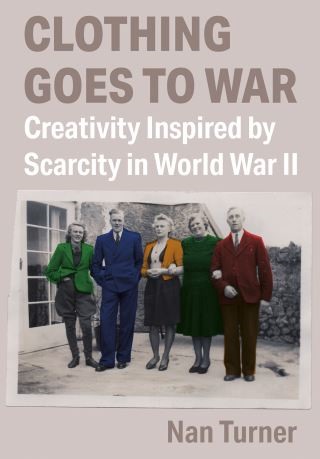 Clothing Goes to War: Creativity Inspired by Scarcity in World War II is the story of clothing use when manufacturing for civilians nearly stopped and raw materials and workers across the globe were shifted to war work. Governments mandated rationing programmes in many countries to regulate the limited supply, in hopes that the burden of austerity would be equally shared. Unfortunately, as the war progressed and resources dwindled, neither ration tickets nor money could buy what did not exist on store shelves.

Many people had to get by with their already limited wardrobes, often impacted by the global economic depression of the previous decade. Creativity, courage and perseverance came into play in caring for clothing using handicraft skills including sewing, knitting, mending, darning and repurposing to make limited wardrobes last during long years of austerity and deprivation.

This fascinating page-turner is the first cross cultural account of the difficulties faced by common people experiencing clothing scarcity and rationing during World War II. In person interviews of women from over ten countries are contextualized with stories of the roles played by newly developed textiles, gendered dress in the workplace, handicraft skills often forgotten today, romance and weddings, rationing represented in war era film and the ever-present black market. Period photos from private collections, magazines and periodicals add dimension to this captivating account of the often overlooked role of clothing during World War II.

Clothing Goes to War will appeal to present day readers interested in curtailing their consumption of clothing in an effort to reduce greenhouse gas emissions fueling climate change. Adopting the conservation techniques of the World War II generation who: 'made do' and 'wore our clothes until they wore out' will help to curtail the fashion industries negative impact on the environment.

'We wore patches on our patches.'

'We wore our clothes until they wore out.'

'I was so excited when they had a feed sack with a border print!'

These are just a few examples of the amazing first-hand experiences of women from over ten countries faced with clothing shortages represented in this book. Governments, regardless of which side they were on, enforced rationing and restrictions on clothing so that scarce textiles could be diverted to outfit the military, leaving limited resources for civilians. Many people had to get by with their already limited wardrobes, often impacted by the global economic depression of the previous decade. Creativity, courage and perseverance came into play in caring for clothing using handicraft skills including sewing, knitting, mending, darning and repurposing to make limited wardrobes last during long years of austerity and deprivation.

Seventy-five years later, the lifestyle of Western culture has become more focused on a sense of entitlement and overuse. Recently, a 'slow fashion' movement promoting growing awareness of the negative effects of over consumption on the environment has motivated people to voluntarily restrict their clothing consumption.

This movement echoes the efforts of civilians during World War II to sustain their limited wardrobes. A great deal about leading a more sustainable lifestyle can be learned from the cultural knowledge presented here in the stories of people who lived through the Great Depression and World War II.

Clothing Goes to War represents an important contribution to the history of textiles and clothing, sociology, environmental studies, material culture and the history of World War II.

Academic readership will be among researchers, educators, scholars and students in fashion studies, history, cultural studies and feminist studies, who will particularly value the thorough documentation.

General readers will particularly enjoy the personal stories and close examination or rationing and alternative methods of clothing families. History-loving readers will like to see war from the consumer side of conflict. The current COVID-19 situation provides an unexpected context for many potential readers who until now have never faced lack of consumer goods, hoarding and market-price manipulation.

Nan Elizabeth Turner is a fashion and academic professional with a strong interest in the history of World War II. Her love of creativity, sewing and fashion propelled her into a career as a fashion designer in New York, Paris and San Francisco before returning to her alma mater, the University of California, Davis, to teach fashion-related courses.