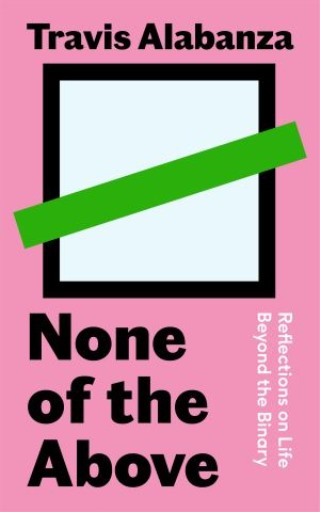 None of the Above

Reflections on Life Beyond the Binary

‘A breath of fresh air . . . There's no memoir like it’ Independent ‘Travis Alabanza writes with such generosity and ease even the most provocative suggestions start to seem obvious . . . Profound and funny’ SHON FAYE ‘Will challenge, empower and move your soul’ Glamour ‘Lucid and glorious’ YRSA DALEY-WARD ‘A gloriously specific, funny and smart body of work’ CANDICE CARTY-WILLIAMS __________ ‘When you are someone that falls outside of categories in so many ways, a lot of things are said to you. And I have had a lot of things said to me.’ In None of the Above, Travis Alabanza examines seven phrases people have directed at them about their gender identity. These phrases have stayed with them over the years. Some are deceptively innocuous, some deliberately loaded or offensive, some celebratory; sentences that have impacted them for better and for worse; sentences that speak to the broader issues raised by a world that insists that gender must be a binary. Through these seven phrases, which include some of their most transformative experiences as a Black, mixed race, non binary person, Travis Alabanza turns a mirror back on society, giving us reason to question the very framework in which we live and the ways we treat each other.

Travis Alabanza: Travis Alabanza is an award-winning writer, performer and theatre maker. After being the youngest recipient of the Artist-in-Residency programme at Tate Galleries, Alabanza’s debut show Burgerz toured internationally to sold-out performances in Southbank Centre, Sao Paulo Brazil and HAU Berlin and won the Edinburgh Fringe Total Theatre Award. In 2020 their theatre show Overflow debuted at the Bush Theatre to widespread acclaim and later streamed online in over 22 countries. Their writing has appeared in the Guardian, Vice, gal-dem andBBC Online, and they previously had a fortnightly column in the Metro. They have been published in numerous anthologies, including Black and Gay In the UK. Their work surrounding gender, trans identity and race has garnered international recognition, and they have given talks at universities including Oxford, Harvard, Bristol and more.