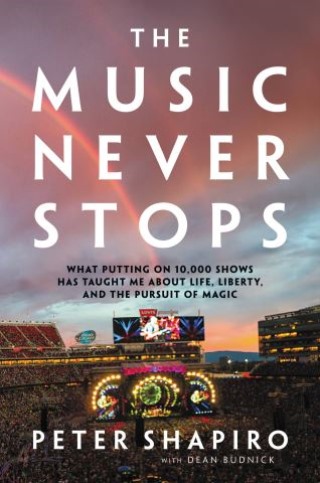 What Putting on 10,000 Shows Has Taught Me About Life, Liberty, and the Pursuit of Magic

The engrossing, insightful, and personal musical odyssey of Peter Shapiro, perhaps the most notable independent concert promoter since Bill Graham

Peter Shapiro is the best known and most influential concert promoter of his generation. He owned the legendary Wetlands in Tribeca and has gone on to much bigger things, including Brooklyn Bowl (NYC, Las Vegas, Philadelphia, and Nashville), the Capitol Theatre in Port Chester, producing U2 3D, and promoting the Grateful Dead’s fiftieth-anniversary tour (“Fare Thee Well”) featuring the Core Four and Trey Anastasio . . . and so much more.

In The Music Never Stops, Shapiro shares the inside story of how he became a power-house in the music industry—an island in an increasingly consolidated landscape of venues, ticketing, and touring—through the lens of fifty iconic concerts. Along the way, readers gain insight into what it was like to work with some of the most celebrated bands in modern music, including not just the Grateful Dead and U2, but also Bob Dylan, Phish, Dave Matthews Band, Al Green, Ms. Lauryn Hill, Jason Isbell, Preservation Hall Jazz Band, The Roots, Robert Plant, Leonard Cohen, and many more.

Featuring never-before-published back-stage anecdotes, insights, and photographs of the biggest bands in the business and the concerts that later became legendary, The Music Never Stops is a perfect guide for any-one who wants to understand the modern live music industry.

Peter Shapiro: Peter Shapiro is a veteran concert promoter whose signature achievements over the past two decades have included Wetlands Preserve, Brooklyn Bowl, the Capitol Theatre, the Lockn' festival, U2 3D, the Jammy Awards, and Fare Thee Well, the 2015 concert event in which he reunited the "core four" members of the Grateful Dead alongside Phish guitarist Trey Anastasio for a record-breaking run of stadium shows. More recently, Shapiro founded Lockn', a music and camping festival that draws 30,000 music fans to Arrington, VA, as well as Jazz & Colors, an experiential event that he has produced in Central Park, the Metropolitan Museum of Art and Chicago's Field Museum. Shapiro also created the Green Apple Festival (which took place simultaneously across eight cities) along with the Jammy Awards. He served as a producer on the We Are One inaugural concert and later returned to the National Mall to oversee Earth Day 40th anniversary celebration, the Women's March and the March for Science.

Dean Budnick has written seven books, including Ticket Masters: The Rise of the Concert Industry and How the Public Got Scalped. He is the co-author of Blues Traveler frontman John Popper's recent memoir, Suck & Blow: And Other Stories I'm Not Supposed to Tell. Budnick is the editor-in-chief of Relix and has reported on the live entertainment industry for Billboard, Variety and The Hollywood Reporter. He directed the documentary Wetlands Preserved: The Story of An Activist Rock Club, which opened nationally before airing on the Sundance Channel. He also is the creator and host of the Long May They Run podcast, which reached #1 on the Apple Music Podcast charts.