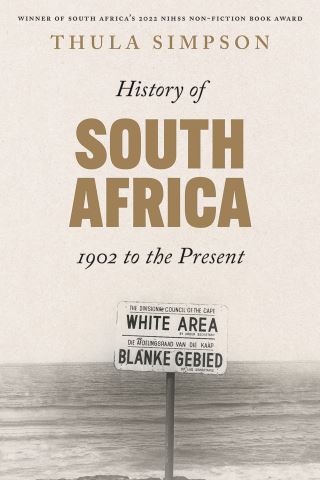 South Africa was born in war, has been cursed by crises and ruptures, and today stands on a precipice once again. This book explores the country’s tumultuous journey from the Second Anglo-Boer War to 2021. Drawing on diaries, letters, oral testimony and diplomatic reports, Thula Simpson follows the South African people through the battles, elections, repression, resistance, strikes, insurrections, massacres, crashes and epidemics that have shaped the nation.

Tracking South Africa’s path from colony to Union and from apartheid to democracy, Simpson documents the influence of key figures including Jan Smuts, Nelson Mandela, Steve Biko, P.W. Botha, Thabo Mbeki and Cyril Ramaphosa. He offers detailed accounts of watershed events like the 1922 Rand Revolt, the Defiance Campaign, Sharpeville, the Soweto uprising and the Marikana massacre. He sheds light on the roles of Gandhi, Churchill, Castro and Thatcher, and explores the impact of the World Wars, the armed struggle and the Border War. Simpson’s history charts the post-apartheid transition and the phases of ANC rule, from Rainbow Nation to transformation; state capture to ‘New Dawn’. Along the way, it reveals the divisions and solidarities of sport; the nation’s economic travails; and painful pandemics, from the Spanish flu to AIDS and Covid-19.

Thula Simpson: Thula Simpson is Associate Professor of History at the University of Pretoria. A British scholar, he obtained his PhD at Birkbeck, University of London. He is the author of the acclaimed Umkhonto we Sizwe: The ANC’s Armed Struggle.