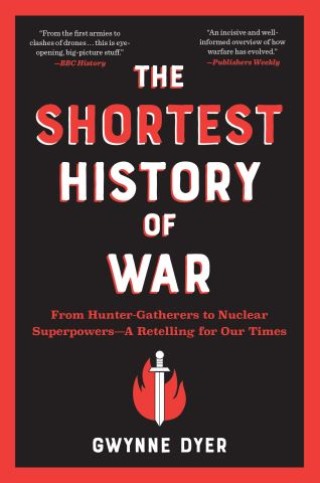 The Shortest History of War

From Hunter-Gatherers to Nuclear Superpowers—A Retelling for Our Times

War has always been a defining feature of human society. This new addition to the Shortest History series explains why we do it—and how we can stop.

War has changed, but we have not. From our hunter-gatherer ancestors to the rival nuclear powers of today, whenever resources have been contested, we’ve gone to battle. Acclaimed historian Gwynne Dyer illuminates our many martial clashes in this brisk account, tracing warfare from prehistory to the world’s first cities—and on to the thousand-year “classical age” of combat, which ended when the firearm changed everything. He examines the brief interlude of “limited war” before eighteenth-century revolution ushered in “total war”—and how the devastation was halted by the nuclear shock of Hiroshima.

Then came the Cold War and Russia’s invasion of Ukraine, which punctured the longest stretch of peace between major powers since World War II. For all our advanced technology and hyperconnected global society, we find ourselves once again on the brink as climate change heightens competition for resources and superpowers stand ready with atomic bombs, drones, and futuristic “autonomous” weapons in development.

Throughout, Dyer delves into anthropology, psychology, and other relevant fields to unmask the drivers of conflict. The Shortest History of War is for anyone who wants to understand the role of war in the human story—and how we can prevent it from defining our future.