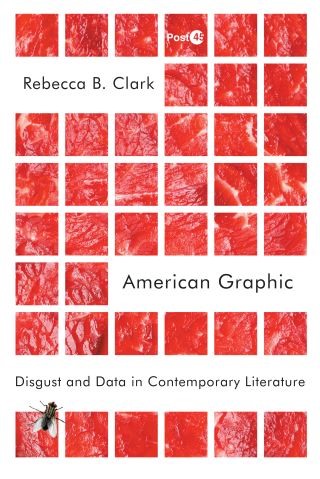 Disgust and Data in Contemporary Literature

What do we really mean when we call something "graphic"? In American Graphic, Rebecca Clark examines the "graphic" as a term tellingly at odds with itself. On the one hand, it seems to evoke the grotesque; on the other hand, it promises the geometrically streamlined in the form of graphs, diagrams, and user interfaces. Clark's innovation is to ask what happens when the same moment in a work of literature is graphic in both ways at once. Her answer suggests the graphic turn in contemporary literature is intimately implicated in the fraught dynamics of identification. As Clark reveals, this double graphic indexes the unseemliness of a lust—in our current culture of information—for cool epistemological mastery over the bodies of others.

Clark analyzes the contemporary graphic along three specific axes: the ethnographic, the pornographic, and the infographic. In each chapter, Clark's explication of the double graphic reads a canonical author against literary, visual and/or performance works by Black and/or female creators. Pairing works by Edgar Allan Poe, Vladimir Nabokov, and Thomas Pynchon with pieces by Mat Johnson, Kara Walker, Fran Ross, Narcissister, and Teju Cole, Clark tests the effects and affects of the double graphic across racialized and gendered axes of differences. American Graphic forces us to face how closely and uncomfortably yoked together disgust and data have become in our increasingly graph-ick world.

Rebecca B. Clark: Rebecca B. Clark received her PhD in English from the University of California, Berkeley. Her work has been published in the journals Narrative, postmedieval, and Post45. She has taught at UC Berkeley and Dartmouth College.