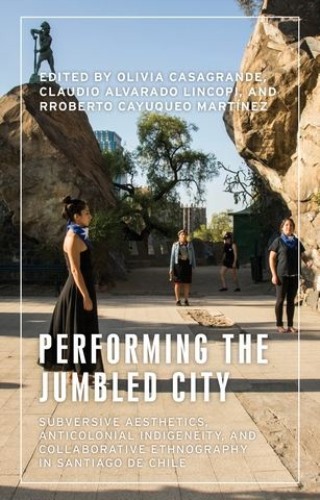 Performing the jumbled city is a complex artefact beyond its own materiality. Linked to a dedicated website hosting additional audio-visual materials, the book acts as a connecting device allowing an exchange between texts, audio-visual materials, and original artworks, situating it in the emerging field of multi-modal ethnography. From this stance, and as an edited collection co-authored with urban indigenous artists and activists, it interrogates the ways in which knowledge is built and shared. The book is constructed as a particular kind of edited collection, shifting between different authorships. The resulting interaction between individual and collective essays draws together scholars’ and activists’ perspectives in a rich exchange between textual, visual and dramatic sections, for the book is organised around the original script of the site-specific performance Santiago Waria, and the related exhibition MapsUrbe.

Making a claim for creation, rather than recuperation, the essays contained in the book put forward alternative imaginations that disrupt the social and material landscape of the (post)colonial city, defying the spatialities usually assigned to colonised bodies and subjects. As such, and actively engaging with current debates through collective writing by indigenous people raising questions in terms of decolonisation, the book stands as both an academic and a political project, interrogating the relationship between activism and academia, and issues of representation, authorship, and knowledge production.