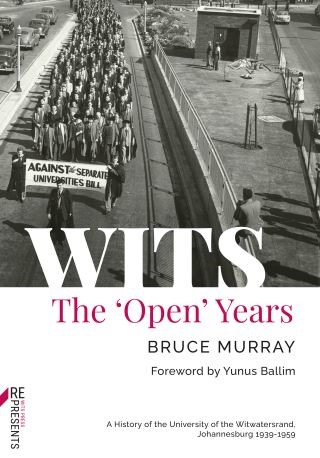 A History of the University of the Witwatersrand, Johannesburg 1939-1959

In the period between the outbreak of World War II in 1939 and the enactment of university apartheid by the Nationalist Government in 1959, the University of the Witwatersrand, Johannesburg (Wits) developed as an ‘open university’, admitting students of all races. This, the second volume of the history of Wits by historian Bruce Murray, has as its central theme the process by which Wits became ‘open’, the compromises this process entailed, and the defence the University mounted to preserve its ‘open’ status in the face of the challenges posed by the Nationalist Government.

The University’s institutional autonomy is highlighted by Yunus Ballim in his preface to the centenary edition of WITS: The ‘Open’ Years. He writes: ‘The emerging posture of a university willing to rise in defence of academic freedom was important because this was to become infused into the institutional culture of Wits.’

The book looks at the University’s role in South Africa’s war effort, its contribution to the education of ex-volunteers after the war, its leading role in training job-seeking professionals required by a rapidly expanding economy, and the rise of research and postgraduate study. Students feature prominently through their political activities, the flourishing of a student intelligentsia, the heyday of the Remember and Give (Rag) parade, rugby intervarsity, and the stunning success of Wits sportsmen and women. WITS: The ‘Open’ Years paints a vivid picture of the range of personalities who enlivened the campus – among them some well-known figures in the new South Africa.

Bruce Murray was Professor Emeritus of History at the University of the Witwatersrand, Johannesburg. He is the author of The People’s Budget 1909/10: Lloyd George and Liberal Politics and WITS: The Early Years.