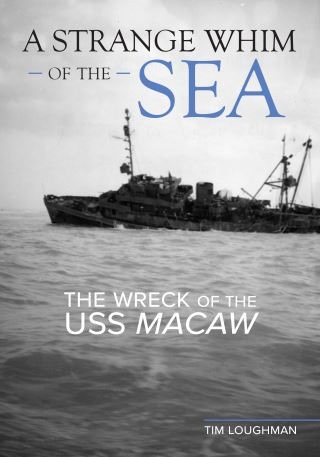 A Strange Whim of the Sea

The Wreck of the USS Macaw

On January 16, 1944, the submarine rescue vessel USS Macaw ran aground at Midway Atoll while attempting to tow the stranded submarine USS Flier. The Flier was pulled free six days later but another three weeks of salvage efforts plagued by rough seas and equipment failures failed to dislodge the Macaw. On February 12, enormous waves nudged the ship backward into deeper water. As night fell and the Macaw slowly sank, the twenty-two sailors on board—ship's captain Paul W. Burton, his executive officer, and twenty enlisted men—sought refuge in the pilothouse but by the following afternoon, the compartment was almost entirely flooded. Burton gave the order to open the portside door and make for the foremast. Three men succeeded but most of the others were swept overboard. Five of them died, including Burton. Three sailors from the base at Midway also lost their lives in two unauthorized rescue attempts.

Drawing on survivors' contemporaneous written statements and interviews conducted over a span of thirty years, A Strange Whim of the Sea: The Wreck of the USS Macaw traces the ship's service from its launch on San Francisco Bay to its disastrous final days at Midway. It tells a war story short on combat but not on drama, a wartime tragedy in which the conflict is more interpersonal, and perhaps intrapersonal, than international. Ultimately, for Burton and the Macaw the real enemy was the sea, and in a deadly denouement, the sea won. Highlighting the underreported role auxiliary vessels played in the war, A Strange Whim of the Sea engages naval historians and students alike with a previously untold story of struggle, sacrifice, death, and survival in the World War II Pacific.

Tim Loughman: Tim Loughman is a graduate of Dartmouth College and Northwestern University’s Medill School of Journalism. He lives in Morro Bay, California.