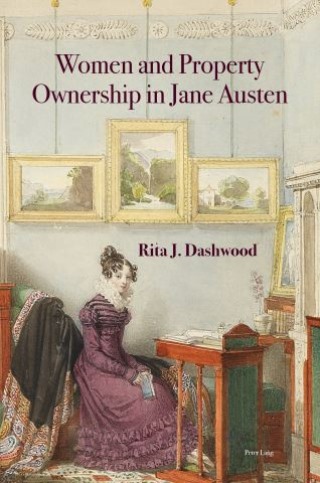 «In this brilliant study of Jane Austen’s fiction, Rita J. Dashwood deftly illuminates the complexity of women’s relationships to nineteenth-century property, by considering not only houses and estates, but law, inheritance, management, interior spaces, and feelings. Women and Property Ownership in Jane Austen, which breaks important new ground in Austen studies, will appeal to newcomers and seasoned readers alike.»

«Combining meticulous close reading with a thorough knowledge of contemporary debates, Rita Dashwood expertly demonstrates how Austen’s fictional characters forged affective connections with the properties they inherited, managed, lived in and imagined, often working around and against the legal system and its constraints. In so doing she both expands our understanding of 'ownership' in the period and provides compelling evidence for Austen as, in her brother’s words, 'the novelist of home'.»

(Professor Joe Bray, Professor of Language and Literature, The University of Sheffield)

investigates the centrality of real property – the house and the estate – in Austen’s fictional works, and how it allows her to depict her characters establishing complex relationships to the spaces they inhabit. By offering an original reconceptualisation of «ownership» which includes legal as well as affective relationships towards property, this book particularly considers how the women in Austen’s novels establish feelings of ownership towards houses they are not legally entitled to own. As this book demonstrates, through her work, Austen offers more than just a criticism of the current property laws and the ways in which they affect women: she puts forward alternative ways for women to establish a sense of purpose for themselves and express their identities through the spaces they create and occupy, unreservedly legitimizing female ownership.