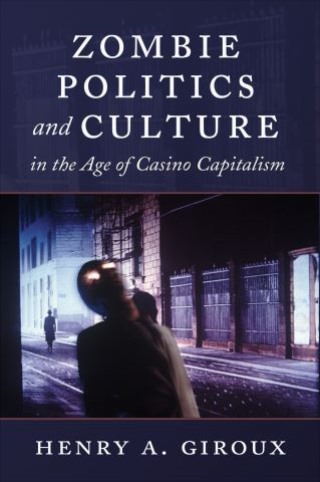 Zombie Politics and Culture in the Age of Casino Capitalism

In the second edition of Zombie Politics and Culture in the Age of Casino Capitalism, Henry A. Giroux uses the metaphor of the zombie to highlight how America has embraced a machinery of social and civil death that chills any vestige of a robust democracy. He charts the various ways in which the political, corporate, and intellectual zombies that rule America embrace death-dealing institutions such as a bloated military, the punishing state, a form of predatory capitalism, and an authoritarian, death-driven set of policies that sanction torture, targeted assassinations, and a permanent war psychology. The author argues that government and corporate paranoia runs deep in America. While maintaining a massive security state, the ruling forces promote the internalization of their ideology, modes of governance, and policies by either seducing citizens with the decadent pleasures of a celebrity-loving consumer culture or by beating them into submission. Giroux calls for a systemic alternative to zombie capitalism through a political and pedagogical imperative to address and inform a new cultural vision, mode of individual subjectivity, and understanding of critical agency. As part of a larger effort to build a broad-based social movement, he argues for a new political language capable of placing education at the center of politics. Connecting the language of critique to the discourse of educated hope he calls for the reclaiming of public spaces and institutions where formative cultures can flourish that nourish the radical imagination, and the ongoing search for justice, equality, and the promise of a democracy to come.

Henry A. Giroux: Henry A. Giroux currently holds the McMaster University Chair for Scholarship in the Public Interest in the English and Cultural Studies Department and has a Distinguished Visiting Professorship at Ryerson University. His primary research areas are in cultural studies, youth studies, critical pedagogy, popular culture, media studies, social theory, and the politics of higher and public education. In 2002, he was named as one of the top fifty educational thinkers of the modern period in Fifty Modern Thinkers on Education: From Piaget to the Present. He is on the editorial and advisory boards of many scholarly journals and has published numerous books and articles. His most recent books are America’s Educational Deficit and the War on Youth (2013), Neoliberalism’s War on Higher Education (2014), and The Violence of Organized Forgetting (2014).