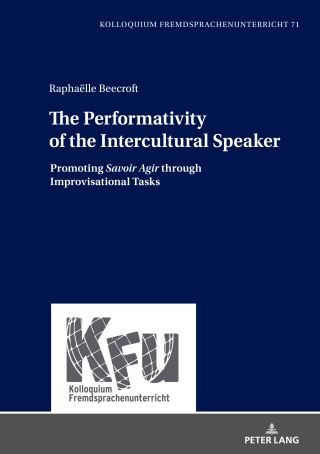 The Performativity of the Intercultural Speaker

Whilst the promotion of Intercultural Communicative Competence (ICC) is described as the main aim of foreign language pedagogy in Germany, its development from a performative-linguistic perspective lacks in research. To address this issue, this book argues that an extension of Byram’s model of ICC to encompass a further newly-developed savoir is necessary. Savoir agir makes explicit the interplay of intercultural and communicative competences present in the model and foregrounds its embodiment in ad-hoc oral interaction. Furthermore, the book emphasises the potential of methods derived from Improvisational Theatre for developing savoir agir in the language classroom. The second part of the book presents a longitudinal, two-year mixed-methods action-research study in which improvisational tasks were designed and implemented on a regular basis in four English classes with the aim of promoting savoir agir.

Dr. Raphaëlle Beecroft is a researcher and teacher educator in English Language Pedagogy at Karlsruhe University of Education, Germany. Her research interests include the further development of ICC and competences for democratic culture, translation, virtual exchange and drama methods in foreign language pedagogy, teacher personality professionalization as well as the decolonialization and diversification of English language teaching.