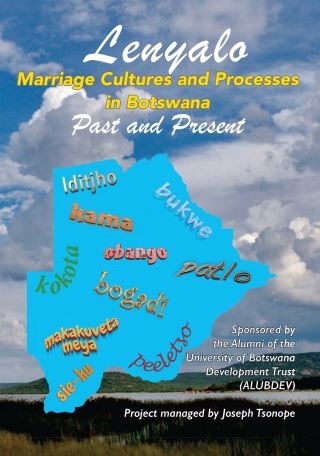 This research sought to find out the commonalities and variations in lenyalo marriage culture and practices in past and present Botswana. It was hoped that the research would culminate in an elaborate account of the series of stages, events as well as processes, which would be a reference point for Botswana's evolving society, and perhaps a rallying point for convergences and the finding resolutions to some of the problems that are seen as being associated with marriage in today's society. This book attempts to cover the formal lenyalo processes as can be recounted, though perhaps not always as comprehensively as desired, on the issues that follow: courtship stages (go kokota/go itshupa); bride-seeking (patlo); lobola (bogadi); bride and groom counselling (go laya); the wedding ceremony (kemo/mokete wa lenyalo); the transfer of a bride to her in-laws; (go isa monyadiwa); and the bride being taken back to her natal home (go gatisiwa). In the course of recounting these events, these marriage rites, the significance of metaphorical language and symbolic actions are discussed. The rights, privileges and benefits associated with traditional marriage practices are brought into focus. Roles of maternal, as opposed to paternal, uncles and aunts are discussed. Problems and challenges that are prevalent in Botswana marriages, as well as possible remedies and standardization of the practices. are also discussed. The book also highlights significant factors of change as well as their impact on traditional marriage rites and processes.