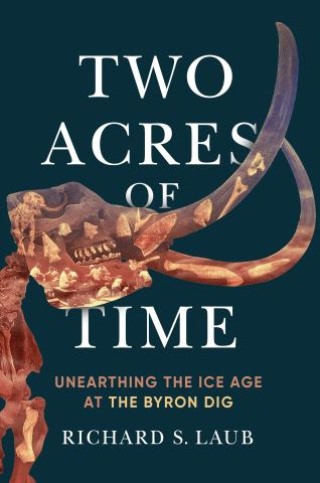 Unearthing the Ice Age at the Byron Dig

In 1959, what appeared to be the bones of a mastodon were found in a western New York pasture. When researchers began to investigate further in the early 1980s, the site proved to hold far more. Known as the Hiscock Site, it contained an astonishingly rich trove of fossils and artifacts dating from the late Ice Age through the onset of European settlement. For nearly three decades, work at the site—the “Byron Dig”—unearthed new evidence of changing fauna, flora, cultures, and environments over the past 13,000 years.

In Two Acres of Time, Richard S. Laub—the principal investigator of the project—tells the story of the Byron Dig. Recounting twenty-nine years of intensive excavation involving more than a thousand participants, he provides a comprehensive account of a working paleontological and archaeological field project and its contributions to our knowledge of the past. Laub explores how understanding of the site evolved through the years, the surprises that came to light along the way, and how contributions from numerous researchers helped achieve a fuller picture of the significance of the findings. The book also shows how people from all walks of life—not only scientists but also volunteers and local small-town residents—worked together to unearth and interpret the site’s contents and to preserve them for future generations. This extensively illustrated book connects life at a scientific excavation project to the grand sweep of long-ago epochs, and is a compelling read and resource for researchers and general readers alike.

Richard S. Laub: Richard S. Laub served as curator of geology at the Buffalo Museum of Science from 1973 to 2011, during which time he did occasional teaching at the University of Buffalo. He initiated and directed the Hiscock Site project from 1983 to 2011.