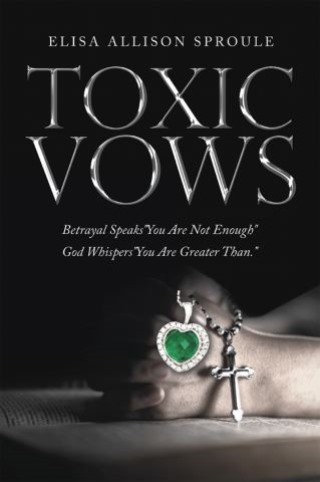 Betrayal Speaks "You Are Not Enough" God Whispers "You Are Greater Than."

Carson’s heart searched, his eyes wondered, Brinley she appears an angel. Carson is captivated. But now, he wonders “what on earth has my heart found.” A single ambious doctor Carson Madison is capivated by Brinley a beautiful young writer. The church is set for the wedding of a lifetime. But when Carson stands alone at the altar, heads turn. Angelic Brinley arrives late. She delivers a heartfelt apology that brings a standing ovation. But with a mystery guest at the wedding, a shocking appearance by a handsome gentleman at the reception and a disturbing conversation is overheard, Carson’s sister Myra believes that there is more attached to Brinley than a halo and wedding jitters. Carson and Brinley turn the key to their new home and walk into their new future. When the kind little lady next door informs Brinley that their new home comes with a disturbing history, the dreams turn to nightmares. Strange calls, conversations and potentially dangerous and damaging events began to take place that lead to Carson’s arrest. Carson’s attorney informs Carson that he believes that Carson is in more than love. As a praying mother takes to her knees, the truth surfaces. Had this match been made in heaven?

Elisa Allison Sproule: ELISA ALLISON SPROULE is a writer and the author of “Forever Not Always”, “The Wages Of Sin” and “Toxic Vows”. Elisa began writing through her own grief of the loss of her husband Clifford Allison. Elisa learned that her faith was stronger than she thought and God was closer than ever. Elisa is a mother, grandmother and wife. She holds trophies and titles with competitive body builder being one of them. Elisa laughs when asked about adding actress to her titles when recently filming with John Travolta. Elisa speaks to womens groups and podcasts encouraging self wellness during tough and difficult times. Teaching that loss and betrayal are disastrous , but they do not have to destroy. Elisa’s travels have taken her as far as Australia and New Zealand. Elisa writes daily with a novel, several children’s books and daily devotionals on the horizon. Elisa is an executive writer for her company, EarthScripts Publishing. Whether Elisa is working from home, the lake or the beach, she enjoys nature, writing, photography, painting and studying God’s word.