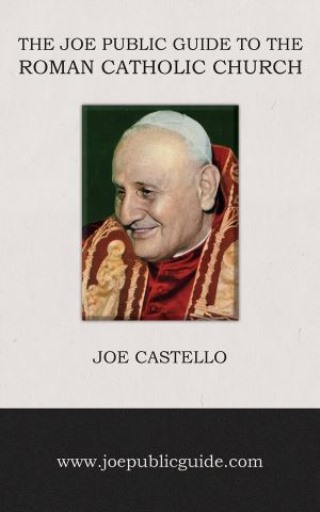 The Joe Public Guide to the Roman Catholic Church

The Roman Catholic Church is the original church of Christianity and is one of the oldest institutions in the world. It has survived for over 2,000 years and has over 1.2 billion adherents. This book observes how the Church has transitioned from a simple structure to one of great complexity and great wealth. This wealth is examined. The Roman Catholic Church has been responsible for many good things in this world but as this book shows, it has also been embroiled in many controversial episodes. The accusations that it has been involved with murder, the Mafia and unscrupulous wealth creation, are all covered in this short book. This book was written in 2019 by a non-Catholic for the benefit of other non-Catholics who have a natural curiosity regarding powerful and long-lasting institutions that have been very influential over so many people’s lives.

Joe Castello: Joe Castello was born in 1939. He graduated in Pharmacy and then created a small chain of pharmacies. He is now retired. He was active in rugby, judo and skiing until common sense prevailed. He still plays in a 9-piece jazz and blues band.